Author Catherine Ryan Hyde shows the value of kindness and acceptance in Have You Seen Luis Velez? Q &A included! 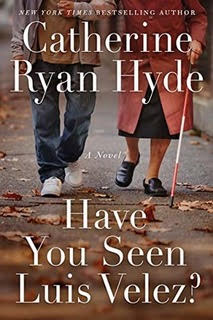 Check out this Review by booknationbyjen:

What better way to kick off the new year than by reading this gem of a book, Have You Seen Luis Velez? Kindness, compassion, generosity, acceptance...this is what we all need and deserve, and this is what author Catherine Ryan Hyde serves up in this highly recommended novel.

Raymond is in high school, a good student with divorced parents of different races. He struggles with his own identity, making friends, fitting in with his family and feeling comfortable in his skin. When his best friend moves away, Raymond has time on his hands and he decides to help Millie/Mrs. G, a blind woman living in his apartment building. She is in desperate need of assistance and he volunteers to take her out to do some errands.

Raymond learns Mrs. G's regular caretaker, Luis Velez, is missing, he becomes determined get answers for his new friend, and focusses on locating him. Multiple people with the same name are spread across the New York area, and Raymond begins a labor intensive search. Discovering some bad news that explains the disappearance of Luis Velez, Raymond must gently tell his aged companion. He attempts to keep her spirits up, yet she appears to fall into despair.

Mrs. G is old and wise, and her companionship and friendship nourishes Raymond in all ways. She understands him, motivates him, and teaches him many lessons about people, himself and the world. He finds it odd that she is the only person he knows who is blind, yet she sees him more clearly than anyone else in his life.

"When it comes to seeing what is important about a person, I think it is possible that what our eyes tell us is only a distraction. "

With the wisdom and guidance he receives from Mrs. G, Raymond transforms into a more self confident, secure young man who is learning who he is, what he wants and needs, and how to ask for it. Throughout Raymond's journey, he makes invaluable connections with all sorts of people along the way who offer friendship and generosity, and unintentionally contribute to who he is becoming.

Have You Seen Luis Velez? is so heartwarming and hopeful. It shows us how everyone can make a difference. To continue with the spirit of giving as we leave a memorable year behind and begin 2020, be inspired to step out on the right foot with acts of kindness and generosity and follow in the footsteps of Raymond, Mrs. G and Luis Velez!

Q: You’ve written three dozen books and still going strong...how do you come up with a new storyline each time?

There are always two or three that are done and in production but people don’t know much about them yet. As to the heart of the question, I’ll pass on two things I’ve said to my agent lately on the subject: One, I told her that writing on a two-book-a-year cadence is supercharging my imagination. It’s something like a muscle, in that the more I use it, the more it can do. Two, wherever these characters and stories are coming from, it’s not between my left and right ear. Call it the collective unconscious, or whatever works for you, and don’t call on me to explain it. But there are infinite stories out there, and when I leave myself open, one begins talking to me.

Q: In Have You Seen Luis Velez?, each of the characters are judged by how they look. Much like the reasoning behind the saying, don't judge a book by its cover, you allow the reader to get to know the characters from the inside. Amazingly, the blind character sees people most clearly. How did this idea come about for you?

A: I have to be honest and say that I really don’t know how any of these ideas come about. All I can say is that I study human nature and write about the parts I find fascinating. Many decades ago I had a spiritual teacher who introduced me to the idea of not relying on the “sense evidence.” Sometimes what we see with our eyes is not the deepest and best truth the world has to offer.

Q: Raymond is searching for a way to help Mrs. G with her despair and is told he can't take away the negative in our lives but can add to the good to create balance. This is such a valuable message and wonderful way to look at the world. Can you tell us who taught you this actionable life lesson?

A: I can’t, no. In fact, I don’t think anyone taught it to me. I think it’s something I learned from observation. I remember even as far back as Becoming Chloe (published in 2007) writing about the wonderful and the terrible in life as two sides of the same coin. One is never really bigger than the other. These days I’m able to see that when one appears bigger than the other it’s just a reflection of where I’m putting my attention.

Q: You introduce some beautiful elements in the book for readers to relate to. The power of music, and in this case, the cello, brings both Raymond and Mrs. G. to tears. How does music play a part in your life?

A: I wouldn’t say music is a huge part of my life, though I have noticed that if I have tears unshed inside, a few poignant notes will bring them right out. I actually tried taking up the cello not too long ago. But with owning a horse, riding dressage five days a week, and doing astrophotography at night, it was just one hobby too many. I haven’t give it up. I just haven’t been good about practicing lately.

Q: Kindness toward animals is always heartwarming, and Raymond and Mrs. G. both reap the benefits of giving and receiving affection from the cat. What is your connection to animals?

A: Well… I adore them. I like them better than I like most people, and I always have. I think it’s because I’m extremely introverted, and they provide just the right amount of unobtrusive companionship. I have a dog, a cat, and a horse, and they are my family.

Q: I read a lot of books, and I think this is the first time I have read about a character that is asexual. I found it to be a perfect choice for our time, as people are becoming more open than ever before when it comes to sexuality and fluidity. Identity can be confusing when each of us is not just one thing, and this was a beautiful way to show the complexity of who we are and how we are all connected as humans. Why did you choose to address this aspect of Raymond?

A: I think it appealed to me for his character because it added to his feeling of “otherness.” I hope this doesn’t feel too personal, but since menopause in my early fifties, I’ve considered myself asexual. It’s a deeply misunderstood identification. People think you’re just shutting out love or whatever, but I have tons of love in my life. I knew if Raymond was growing up asexual he would feel misunderstood, and possibly even need help understanding himself. Mrs. G was just the nonjudgmental friend to help him through that.

Q: Many of the characters were misunderstood, (Raymond, Mrs. G., Luis Velez, Raymond's dad, Raymond's mom) yet when looked at more closely, the positive aspects of each were revealed. Are you a positive, glass half full person with hope? Which character do you relate to most? Why did you choose for us not to see redeeming qualities in the woman with the gun?

A: Well, I wrote Pay It Forward. So that’s the answer to the question about my optimism.

I relate to both Raymond and Mrs. G very strongly. Probably equally.

I think it’s important to remember that, in a novel, we will see only what our viewpoint character sees. And we will see less in the minor characters than in the main ones. So there’s only just so much we will know about this woman by watching her defend herself in court. I do feel that I humanized her as best I could by showing her two grown children present at the trial, and in the scene where the son tries to help Raymond see, successfully or not, that his mother—while not keen on admitting her own faults—is not a bad person in his eyes. People tend to ask after character development in very minor characters, but the author really only develops characters to the extent that their place in the story warrants. At least, that’s my view on the subject.

Q: Why did you choose not to broach the subject of gun rights/laws?

A: I thought I did broach the subject. The novel itself is the best statement I felt I could make regarding “Stand Your Ground” gun laws. But my goal was to address the human toll, rather than overtly political aspects.

For a guide on teaching your children to be kind, check out: The Kindness Advantage.

Check out more book reviews and suggestions on Book Nation by Jen!